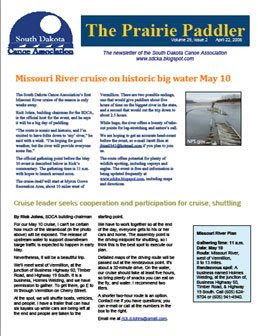 Remember, if you are a SDCA member and would prefer to receive an electronic copy (save us a stamp) you can sign up to have the Prairie Paddler e-mail to you each month. Just e-mail Jarett or Steven and we'll set you up. The e-version is in color - like this one!
Posted by Steven Dahlmeier at 4/24/2008 08:32:00 PM No comments:

The horses enjoyed it, too 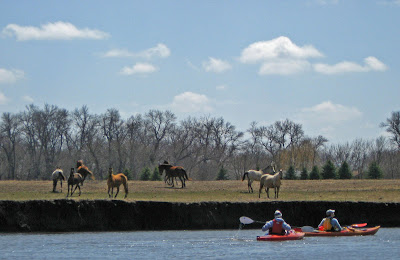 Dawne O. and her daughters joined the fun in Flandreau Saturday in their canoe. Dawne took this great photo of the horses that gamboled along the Big Sioux's banks on our route.

Her contribution to the blog is a good example of the community spirit of this site - thanks Dawne, and good luck on your personal paddling blog.

Many thanks! Wow, that was fun 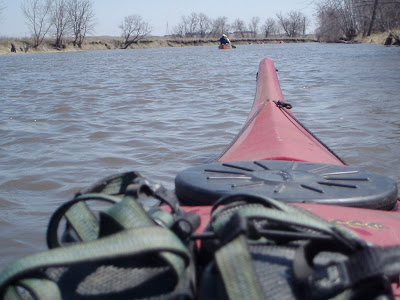 With temps in the 60s and participation numbers in the 70s, it's hard to describe the April 19 Big Sioux River cruise with a modifier other than successful.

As mentioned below, any success is a team effort, and as the organizer of the SDCA side of this event, I give most-humble thank yous to all who came out and took part. It seemed like everyone was dry at the end, we got some press coverage, and no boat and car remained apart for very long once the paddling was done.

My thanks one last time to the Sierra Club and the Outdoor Women of South Dakota. I hope this event kick-starts every paddler's 2008 season on the water. 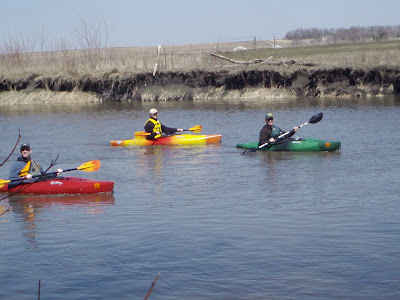 Thank you to everyone who attended our Earth Day Regatta in Flandreau. It turned out to be a perfect day for a wonderful event. It was good to see so many familiar faces and meet new friends.
Click here to view photos from the event:
http://www.flickr.com/photos/25843589@N02/sets/72157604638259684/

Do you have an idea that would make this event better (maps, restrooms, etc) - or maybe you thought this event was perfect (route, weather, put-in/take-out, etc.) - let us know by commenting. We appreciate your thoughts. 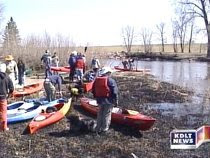 Around six dozen people are getting an early start on their Earth Day celebrations. The East River Sierra Club and the South Dakota Canoe and Kayacking Group are coming together to mix exercise with duty.It's a mixture of two groups with different missions. The South Dakota Canoe and Kayaking Group heads down the river for the sport.The Sierra Club works to keep parks and rivers clean.Derald Hallem of the Sierra Club says, "I like it...clean."That's why the groups have come together to head down the Big Sioux River to clean it up.The VP of the SD Canoe and Kayaking Group, Sharon Kelly says, "It's just a chance to get out and go canoeing and experience the river and streams during this earth day."The group starts North of Flandreau and floats down the river about nine miles.It's a four-hour trip but most find what they are doing to be their duty.Derald Hallem says, "I don't like going places that are full of garbage or see garbage in the river."The Sierra Club asks for a volunteer ten-dollar donation.They use the money raised for further cleaning and adding things like signs to drop sites for kayakers and canoers.But this isn't the only time or place they plan on picking up garbage. With seventy-five people, the group plans to take part in several other clean-up sessions throughout the state."The groups will be heading to Yankton Trails in a few weeks. Sharon Kelly says, "It's a chance to get out and really experience the river more than anything but also do a little work to it."As two groups combine their missions and their passions, rivers and streams in South Dakota will soon see a cleaner earth day.The groups are planning on doing one paddle event per month. If you would like more information you can visit this address: www.sdcka.blogspot.com.
Posted by Steven Dahlmeier at 4/20/2008 12:04:00 PM No comments: 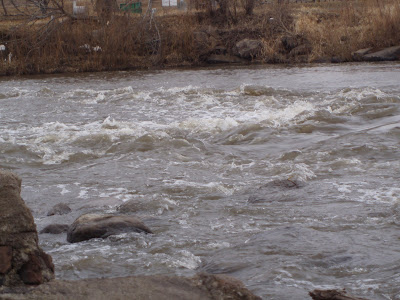 Many thanks to all our organizers, for getting the word out, especially Deb McIntyre from the East River Group Sierra Club. The cruise will be well attended and there's going to be fun today, friends.

Don't forget your life jacket or PFD, some dry clothes just in case, water and snacks, too.

Safe travels to all today, and thank you for making it out the event. If you are just tuning in, the posts below highlight the route and times and such. 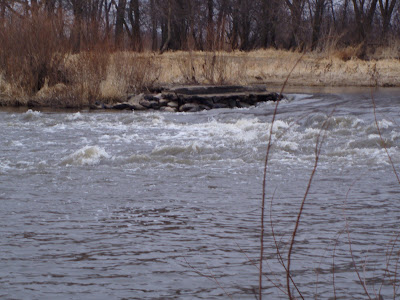 Just a reminder to all paddlers, Saturday is our Earth Day Cruise, here are the details for newcomers to the blog!

Shuttle service is available, bus costs $10. To pre-register for the bus, e-mail Deb McIntyre at peaceandjustice@svtv.com.

Forecast says 65 and sunny, with no report on wind as of yet. Let's hope for mild winds, ya'll.

E-mail Jarett Bies at jbies0341@hotmail.com for questions on this trip. Images follow, reposted to help explain where we're launching from.

We have permission to launch from either side of the river, so feel free to unload in the camping area (north side of river/bridge) or at the powwow grounds themselves (south side.)

It's going to be a hoot! But make sure you pack a dry bag with spare clothing just in case. Flotation devices required.

See the post just below this one (Ice Out Continues) for good images of the put-in spot. The third or fourth photo down shows the spot, and it should offer a "dry shoes" launch! 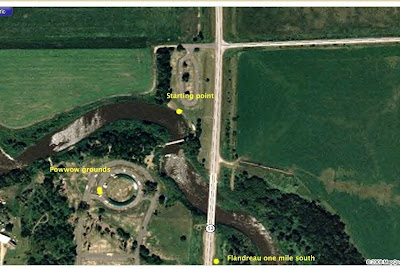 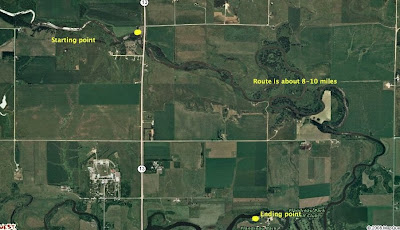 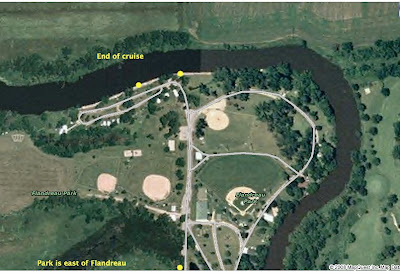 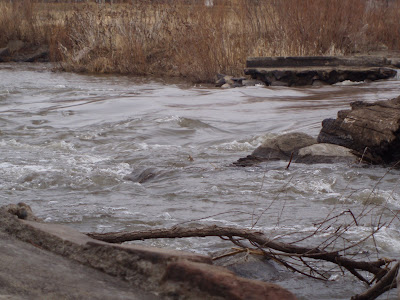 I did some solo advanced recon today and paddled the starting point for the 4-19 cruise. The conditions were grim (windy and low temps) but plenty of photos follow. 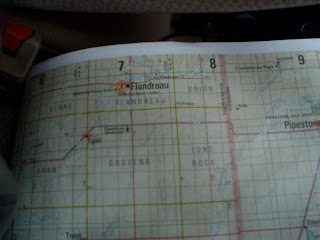 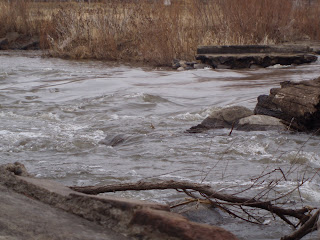 Last week, I spoke with Dr. Jonathan Jenks, a wildlife sciences professor from SDSU. He said the route may contain river otters, which were reintroduced on the BSR a few years ago. I saw none today, but hey, wouldn't that be cool? No ice, but a little snow. I did a nose-first launch, to avoid stepping into the water, and the grass and mud made a smooth slide. 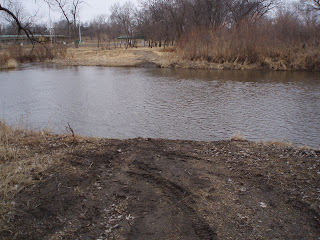 I launched from the south side of the river, went upstream for a bit, then came back down and ran the rapids. The photo above is from the north, looking across to where I put in. 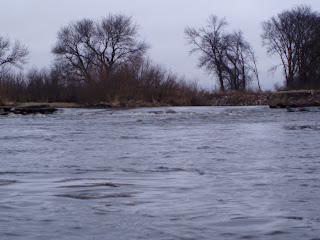 For those considering putting in below the dam remnants that form this rapids, don't do it. The put-in seemed 1,000 times better than any spot below the rapids. Plus, the rapids was a thrill, not scary, one just has to sit still. I took out on the south side under the bridge, but it wasn't a user-friendly scenario.

Feels good to get the first trip of the season on April 6. This cruise is really shaping up to be a good one. 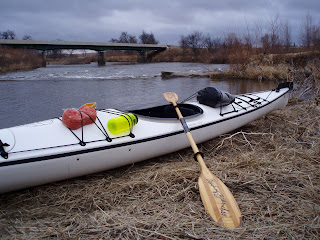 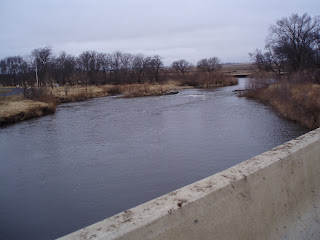 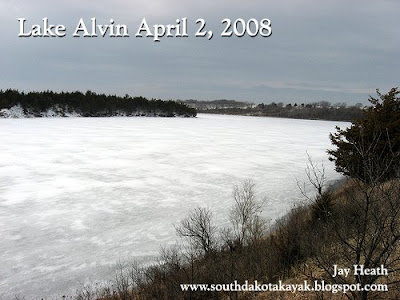 With temperatures hitting the 60's, ice is melting throughout eastern South Dakota's lakes and rivers. Our Pierre friends are bragging about their open water, which makes us eastern folks pretty antsy for the ice to melt.

Use this thread to post any lakes, rivers or streams that are completely ice free or frozen. I will update the main thread with updates. Hopefully we'll have open water on every lake and stream by the end of next week. Fingers crossed. 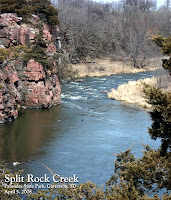 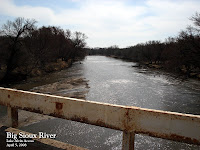 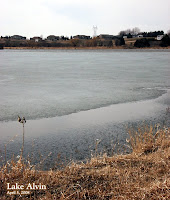