The May 2009 Prairie Paddler

One week to the paddling fair at Lake Alvin

P6010252
Originally uploaded by Iron Bieso
Don't forget that a week from Sunday, on June 7, the club will have a paddling fair for all comers to try their hands at kayaking and canoeing.

There are details in the new newsletter that is going out today.

The event begins at 11 a.m. Take the SW entrance to the lake - no fee to pay - and you'll see where to park. There's a vault toilet there, and there will be plenty of SDCA members.

We'll put a news release out with the Argus Leader today but send the word far and wide to anyone who wants to give paddling a try. Last year we had a great turnout, in part due to the stellar weather.

Looking forward to seeing YOU there.

The presentation will begin at 5:45 p.m. and includes an overview of the project followed by a question and answer session. There will also be examples of equipment being used to assess the water quality within the project area.

This link: http://www.siouxfalls.org/PublicWorks/environmental/tmdl_project has information on the project and updates.

The TMDL study is under way on the Big Sioux River in the Sioux Falls area, looking primarily at sediment (total suspended solids) and bacteria (fecal coliform.)

The levels of these two are now, or have historically been, above the target threshold levels for full beneficial use of the water. Both impact recreational use of the river: High TSS adversely impacts the fishery, and elevated bacteria counts pose human health risks under certain conditions.

There is more information from the 2008 Integrated Report at this link: http://denr.sd.gov/documents/08IRFinal.pdf, which has replaced the old 303(d) listing under the Clean Water Act.

The study is not looking at organic compounds such as herbicides, as there are no known impairments attributable to these substances.

SDCA members are encouraged to attend, especially if they wish to get information on how to contribute to the efforts to keep an eye on pollution in our rivers.
Posted by Jarett C. Bies at 5/27/2009 08:13:00 PM No comments:

The waterway is described well on Jay Heath's blog, he was a participant. It looks and sounds like the Skunk has something to offer for paddlers.

Only two weeks until the June 6 Missouri River cruise in Vermillion and the SDCA paddling fair on June 7 at Lake Alvin.

Details for Saturday ... and more

attc9e4b
Originally uploaded by Iron Bieso
The next SDCA event is a cruise on the Skunk Creek in Sioux Falls.
The event begins at 5:30 a.m. Saturday, May 23.

Member Jerry Foy will play host, and we'll launch from his back yard.
In this image, Jerry's house is in the top left corner

Jerry lives at 529 N. Blue Bell Lane in Sioux Falls. For some reason, Google won't map it, but the directions are easy: Exit I-29 at 12th Street and head west to La Mesa, then go north on that street.
Take La Mesa to Fifth Street (which is known as Song Bird on the west side of the street, then go left on Song Bird for three blocks. Take a right on Blue Bell Lane to 529. He has a three-car garage, and his phone number is (605) 359-5517.

Jerry said the water levels are a bit low, so be ready to wade a little, get a few new boat scrapes, and in general to have fun. There's some rain in the forecast so perhaps it'll refill a bit before Saturday.

Hopefully it won't be as low as this shot Jerry included from a recent run on the Split Rock Creek between Garretson and Palisades State Park.

But chances are there will be some low spots. An easy trick for kayakers, to avoid getting out, is to set your paddle across your cockpit, reach down with both hands, and press/pull/drag your boat through the shallow spots. It doesn't always work, but it beats entering/exiting dozens of times.

The early start should give paddlers a chance to see some wildlife. Owls abound along the creek, and Jerry said he usually sees deer and sometimes turkey along the bank.

From Jerry's house it's about three hours to take-out on Western Avenue. Shuttling will be arranged that morning. The possibility of taking out at Cliff Avenue is there, so we'll see what people want to do and plan accordingly.

In other news, don't forget the SDCA paddling fair June 7 at Lake Alvin. It's a great chance to try a new boat or if you have yet to buy, to paddle before you spend. Last year we had a great time, great weather, and a number of people were able to see what kayaks and canoes have to offer.

On June 6, there's a cruise set on the Missouri River near Vermillion. A PDF with the directions is here: Mulberry Bend Directions
Publish at Scribd or explore others:

The Vermillion event is set to celebrate the development of the Missouri National Recreational River Water Trail. The route follows part of the trail. There are cockpits in kayaks available for rent for folks who want to go but have no boat. Missouri River Expeditions, a kayaking outfitter based near Gayville, will host/guide this event.

Tim Cowman with the team developing the Missouri National Recreational River Water Trail is the contact on that event. You can e-mail him at Tim.Cowman@usd.edu, or visit the MNRRWT site at this link: http://www.mnrrwatertrail.org/.

Lastly, there's been some talk of fences across waterways. The rules, guidelines, and a contact to report these things is all below, compliments of the South Dakota Dept. of Natural Resources.

Legal fencing in South Dakota
Online at: http://denr.sd.gov/des/wr/StreamFencingGuide.pdf
More info on streams and fencing: http://denr.sd.gov/des/wr/fence.aspx.
The contact is Michael DeFea at 605-773-3352, or michael.defea@state.sd.us.
Landowner Responsibilities
A landowner who fences any navigable waterway must register the fence location, and mark the fence and gate, so both are visible upstream and downstream. Landowners intending to build fences and landowners who already have fences in place must comply with these laws. Failure to comply with these laws is a Class 2 misdemeanor. Following is a complete list of landowner requirements and gate specifications.
Landowner Requirements
1) Registration of the fence with the Chief Engineer includes the following:
a) The name, address, and telephone number of the landowner proposing to construct or maintain the fence.
b) The name, address, and telephone number of the person responsible for maintaining the fence if different than the landowner.
c) The location of the fence where it crosses the stream, described by its direction and distance from the nearest legal section corner, including section number, township, and range.
2) Install and maintain a functional gate in the fence over the stream or, if allowed by variance, immediately adjacent to the public right of way to allow passage of boats, canoes, other vessels, snowmobiles, and pedestrians.
3) Remove the gate or keep it open when livestock are not present, unless a variance has been granted.
Trespassing or criminal acts such as vandalism should be reported to local law enforcement.
Minimum Gate Specifications
1) The gate must have a minimum overhead clearance of 6 feet, and a minimum opening of 6 feet wide.
2) The gate opening must be outlined with reflective or highly visible material.
3) Fencing materials may be used to close the gap on each side of the gate between the gate and the stream bank.
4) Reflectors, spaced at a maximum of 25 feet, must be attached to the fencing that connects the gate to the stream banks.
5) All reflectors or highly visible material must be visible both upstream and downstream.
6) The gate must lie between the ordinary high water marks of the stream.

The DENR Water Rights Program is responsible for processing fence registrations and processing variance requirements. Any questions regarding fencing issues, or location of registered fences, should be made to DENR, Water Rights Program, 523 E. Capitol Ave., Pierre, SD 57501. Phone (605) 773-3352. Registration forms are available on the Web at: www.state.sd.us/denr/des/waterrights/fence.htm.
Posted by Jarett C. Bies at 5/20/2009 01:54:00 PM No comments:

00007.mp4
Originally uploaded by Iron Bieso
Sorry there's no audio on this video - it's my new camera and I'm still learning. But this image of Travis on Marindahl Lake, and his father, Dave, gives a good indicator of the outreach SDCA can do. Both were neophytes to kayaks, both got out and loved 'em.

The Marindahl Lake paddling fair was fun, but we ended up having more members there than we did curious public.

The weather was about perfect, and save for the tricky nature in finding the lake, all nestled in a little South Dakota prairie valley, everyone had fun.

Host Rick Johns brought a few of his creations and several family members, and in all, it was a great operation in May.

It should serve us all well as a good tune-up for our June 7 event at Lake Alvin, which is all set, with Jay Heath and Jarett running things on the dock. Write either member for information, and pass the word to your friends and neighbors.

On to other news. Several SDCA board members attended the May 7 meeting to discuss the plans for the Klondike Dam on the Big Sioux River near Canton. The dam is going to be reduced and restructured to make it more friendly to paddlers, fishing enthusiasts, and fish.

Mary Finck of the SDCA board provided this photo of the proposed plan. Anyone with insight on the dam or input on possible changes to the construction/thinking is welcome to share with the Iowa DNR.

Waters downstream include our May 23 Skunk Creek run in Sioux Falls. It appears more people are voting to run the river bright and early (5 a.m. start time) to get a glimpse of some wildlife.

Reports received say the Skunk is still running nicely, but there will be some shallow spots, so leave your fiberglass at home, ya'll.

We'll have more information soon, but June 6 is a big cruise on the Missouri River. Several groups, including ours, are sponsoring the event and there will be boats available for rental for $20. More to come on that front. The cruise takes place in the Vermillion/Burbank area of the river.
Posted by Jarett C. Bies at 5/13/2009 01:47:00 PM No comments: 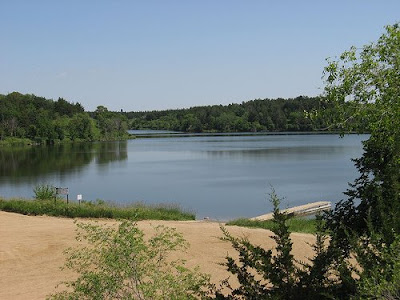 The first paddling fair of 2009 starts at noon sharp Saturday, May 9, at Marindahl Lake, located about six miles west and three miles south of Irene. Since we'll be in the southeastern part of the state, we sure hope we get some paddlers or curious folks from Yankton, Vermillion, and even Sioux City.

SDCA building chairman Rick Johns will host the event and will offer a range of craft he built for folks to try out. One of the newest Johns' creations is this unique canoe. 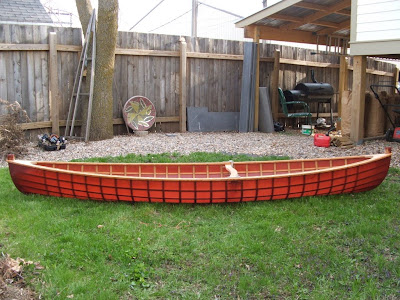 Rick said it is a solo canoe, designed for a paddler with a double-blade. It will be available for folks to put its 11-foot, 1-inch beauty through the mild waves of Marindahl. Weather looks sharp, too, with sun and 63 forecast.

Please spread the word wide and far - esp. to those who do not go to this blog - and we'll see you Saturday for some hands-on fun. 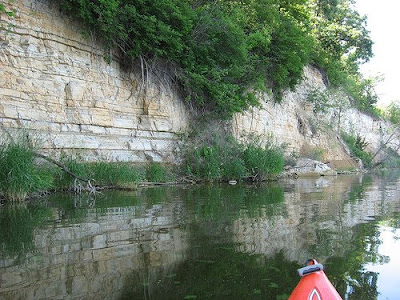