The following was submitted by Loren Odland, SDCKA member from Sioux Falls. 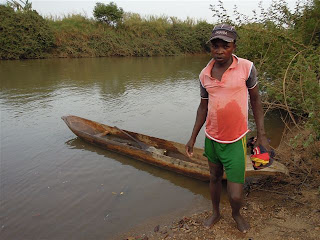 In March my wife, Sandy, and I were in Cameroon (in western Africa) to visit the Churches, Mission Stations, the Hospital, the Seminary, Bible Schools, Elementary Schools, and the people of the Evangelical Lutheran Church in Cameroon. We also helped put a roof on a new church building at Ndokayo (pronounced “doe-ky-oh”). We drove over 1,400 miles on roads that were in a variety of conditions – none of them pristine! J The drive from Meiganga to Garoua Boulai is very rough with major sections under construction. It was dry season so the road surface was mostly rust-red powder and billowed behind our vehicle blocking visibility completely for anyone following us. We stopped for a break at the Lom River near the Cameroon border with Central African Republic. A lone fisherman was checking and resetting his nets using his dug-out canoe. I watched and waited until he came to shore. As I was watching him, he was watching me. Although we had a major language barrier (his language is Gbaya and mine is English) we communicated enough so he knew I was fascinated by him, his canoe, and his paddle. When I asked to take pictures, he quickly let me know it was okay. I “just happened to have” my SDCK sticker with me, so that shows up in a couple pictures. I didn’t know how to ask him if I could fasten the sticker onto his canoe, so I simply set it on the bow. When we parted, I thanked him in his native Gbaya: “Osoko”. We both smiled.

Imagine the setting: the river was very low, the banks were very high, amazing bird songs filled the air, the concrete bridge over the river was missing major sections of guard rail and the decking of the bridge itself was questionable. In spite of the river current, this fisherman handled his canoe with grace and confidence. He made the canoe from a log and used fire to burn out the inside to help make carving the interior easier. I don’t know the species of wood for sure; but mahogany is the native tree that reaches that size and is used for most building. (The church rafters are solid mahogany!) The canoe is extremely heavy and would take more than two men to portage it! 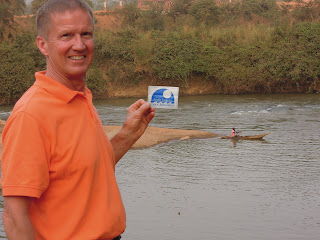 I’m on the pastoral staff of Gloria Dei Lutheran Church in southeastern Sioux Falls. Sandy has her own long-arm quilting business --- and the amazing ability to encourage me in my love of boats and water. She joins me on the water when she can – and even went with me to Africa!

Anyone interested in a cruise on the Lom River? It might take some planning; but count me in!

You can reach Loren at odland3@sio.midco.net